Djinn seem to be having a bit of a moment in fantasy fiction these days, and I couldn’t be happier. When I first started to be interested in djinn stories, a few years ago, it seemed like a bit of a struggle to find the stories that I would be interested in. Now, it seems that every list of new exciting book releases has something like City of Brass or Djinn City.

But I believe in recommending books that I’ve already read, not just telling you about the books I’m excited about reading soon, so here are five books that I’ve loved featuring djinn, marids, and ifrit.* 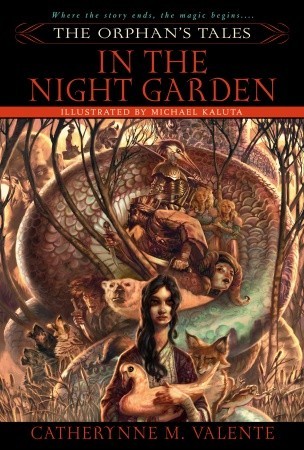 It all started with Valente’s The Orphan’s Tales in the Night Garden. Up until this book, I didn’t read much fantasy at all. Like my father, I believed in a hard line between science fiction and fantasy and took a bit of a snobbish attitude toward “that magic stuff.” Then I heard Valente read at a Bookslut reading in Chicago years and years ago and I was hooked. This isn’t an djinn story outright so much as a tangled yarn of interconnected fairy tales, but it contains a very memorable ifrit. When I started getting into djinn years later, I looked back at this book as planting the seed.

And while I don’t want to fill a Friday Five with recommendations by the same author, I feel an honorable mention has to go to Valente’s Fairyland series, which features a boy, Saturday, who turns out to marid, who might just break your heart.

After N.K. Jemisin’s The Killing Moon sparked an interest in Egyptian-influenced fiction, I picked up Cairo by G. Willow Wilson. And this is where the jinn obsession truly began. While the plot of this story is about a jinn outsmarting his captors, the book itself is about a city, and all the different stakes people have in it — from those who’s families have lived there for generations to new arrivals with wildly distorted visions of the city and what it means. Of course, as it ends up, all of their versions of Cairo are a dream, and they are forced to confront those places where their dreams don’t meet the reality. A short story that still manages to get into some of the vast complexities of the Middle East.

I had a very  hard time choosing this book over the equally wonderful Alif the Unseen. But I will try to rein it in after this, or else this Friday Five will become a Friday Fifteen. 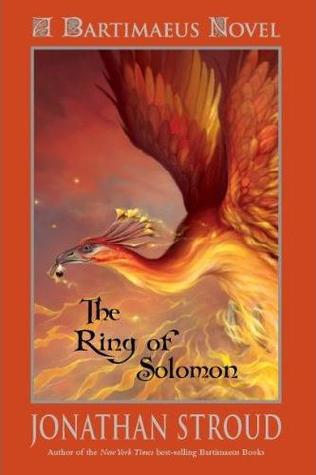 After asking around for recommendations of djinn stories, The Ring of Solomon — which is not only all about djinn and marids, but also has a (somewhat convoluted) connection to my tattoo — went straight to the top of my to-read pile. At first I had some concerns about this novel, primarily the ways in which it interacts within the well-known story of the courtship of King Solomon and the Queen of Sheba. But also the ways that the story used the theme of slavery to examine not only the way that djinn and marids were slaves to their summoners, but also the slaves and poor laborers of Solomon, and even the ideals, codes, and aspirations that even the powerful are slaves to. This may be a middle grade novel, but I found it both amusing and satisfying. If you’re looking for a good introduction to djinn, this would be a fun and easy place to start. 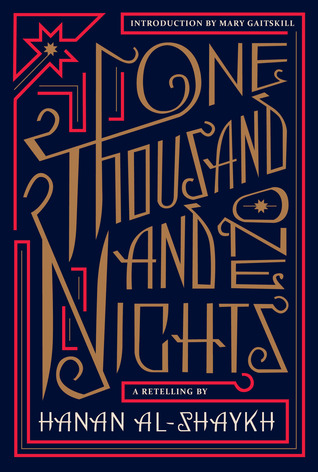 So in some ways I was burrowing closer and closer to the source material. I knew that eventually I should get around to reading One Thousand and One Nights, but which translation? I’d heard a while back that Al-Shaykh, whose books I had loved for many years, was doing an interpretation for the stage. When I discovered that there was a book version as well, I had to have it immediately.

These nineteen stories aren’t sanitized or censored for the modern reader, it’s only the language that is brought up to date. These stories seem to be chosen to deliberately complicate any ideas of who is the fairer, weaker, more honest, or more lustful sex. And while the focus is mostly on the relationships between men and women, the jinni are definitely here.

First of all, I have the exquisitely beautiful clothbound edition of this book, Tales of the Marvellous and News of the Strange, which is so lovely in its copper on turquoise illustrations that I just want to pet it forever. But the text itself is equally miraculous. The translation of a recently discovered thousand-year-old text, which includes earlier versions of stories that made it into One Thousand and One Nights, as well as stories that probably haven’t been seen in hundreds of years.

I hesitated including this book in this list because it is not for the casual fantasy reader. In fact, one of the amazing thing about reading this book is seeing just how much the way we tell stories as a species has changed in a thousand years. I don’t just mean the rape, racism, and other violence, but the way characters rarely change and how main plot points are usually resolved by some god, djinn, or other. But while some of these stories are a bit of a slog, there is real magic here. And the glimpse into the history of storytelling in general and djinn stories specifically is priceless.

What do you think? Have you read any of these books? Are you into djinn? Why or why not?

*djinn are alternatively spelled a dozen different ways, and the conventions of how to use the plural form vary as well. I generally tend to follow the way the book I am talking about uses the word. Also, the differences between djinn, ifrit, and marid vary from book to book. But most would classify ifrit and marid as types of djinn, so djinn is the term I use most frequently above.

Manage Cookie Consent
To provide the best experiences, we use technologies like cookies to store and/or access device information. Consenting to these technologies will allow us to process data such as browsing behavior or unique IDs on this site. Not consenting or withdrawing consent, may adversely affect certain features and functions.
Manage options Manage services Manage vendors Read more about these purposes
View preferences
{title} {title} {title}