Q & A with author Sarah A. Macklin 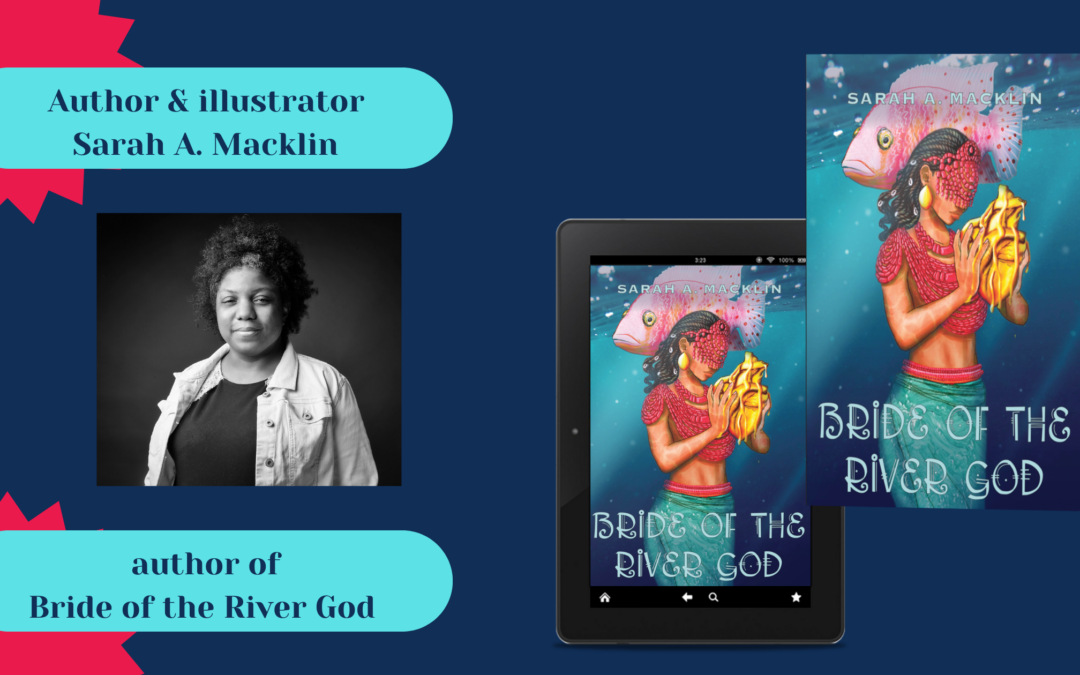 Sarah A. Macklin is a writer born and raised just outside of Columbia, SC. She has written several short stories that have appeared in FIYAH Literary Magazine, The Magazine of Fantasy and Science Fiction, Translunar Traveler’s Lounge, and the Griots: Sisters of the Spear anthology. Her debut novel, The Royal Heretic, was released in 2020. She resides just beyond the outskirts of suburbia with her husband and two daughters.

Can you tell us a little bit about Bride of the River God, for those who haven’t read it yet?

Bride of the River God is my version of a more grown up Alice In Wonderland, about a young woman who travels through the land of the gods to save the patron deity of her people.

Do you have a favorite scene in the book?

Definitely the scene in which our protagonist, Anene, meets the villain. But… I can’t mention much more about that.

Conversely, was there a scene that was hardest to write?

Funny enough, the scene where Anene meets the villain was the hardest to write as well. I wanted an unusual confrontation so the dialogue had to be just right. It took me forever to write.

What came first for you, for this story? A character? The world? A plot point?

I’ve always loved Alice In Wonderland and wanted to write something with the same sort of surrealness, but with real danger in the journey.

Are you a plotter or a pantser?

I’m a bit of both. My favorite analogy for the way I usually write is like looking over a fog covered valley. I can see the ridge I’m starting on and the ridge I need to get to, but the valley is a mystery. There’s a boulder over there and a tree a little farther along that I can use as landmarks but I won’t know what’s actually in the valley until I start walking. That’s how I approach my stories.

When you have a story idea, how do you decide whether it is best told in prose or illustrated form? Could you imagine a comics version of Bride of the River God?

The story tells me which medium it’s best for. Some stories need the expansiveness of prose. Some are far more visual and would be dulled by being written out. I couldn’t see Bride of the River God as a comic. But I could see it on TV….

How did you get into the fantasy genre?

My dad is a huge nerd so there was no way I could grow up in that house and not love fantasy. But I watched The Dark Crystal as a young kid and was hooked. I nearly wore the VHS out.

What authors and books have had a significant influence on you?

The Hundred Thousand Kingdoms by N.K. Jemisin changed my entire perception of what a fantasy novel could be. And years ago, when I discovered the author/publisher Milton Davis, I learned that there were other black people writing in the same genre I was and it gave me the encouragement to pick writing back up seriously.

Do you have any writing rituals? Listen to music, work in a dedicated space, or at a dedicated time?

Ideally, I write first thing in the morning, before breakfast and any electronic distractions, with my headphones on listening to one of my Spotify playlists. That’s when I get my most productive writing in. But I’ve learned to write anywhere, anytime. You can’t always wait for the ideal conditions.

What is the best compliment you have ever received on your writing?

My husband started crying at the end of a short story I wrote. It was exactly what I was looking for.

Can you tell us anything about stories you are working on now?

I’m working on a fantasy mystery that deals with the heroes of a revolution, a fantasy story in a city that’s like a 1900’s Istanbul/New York, and a graphic novel about retired villains going on one last heist.

What are you doing when you aren’t writing?

Sleep? Lol. I mainly catch up on my reading and TV, but I also love cooking and sewing. I’m an artist just as much as I’m a writer, so if I have time, I try to work on some personal pieces.

My favorite random question to finish up! You go to the store and come home with three things that weren’t on your list. What did you buy?

Reese’s peanut butter cups with the pretzels, a lime jariscos soda, and microwavable white castle cheeseburgers (we don’t have White Castle down here).

If you don’t already have your own copy of Bride of the River God, you can get it here! If you’ve read it and loved it, please remember to rate and review it on goodreads, StoryGraph, or wherever fine books are sold! Follow Sarah on Instagram or Twitter @killianfantasy, or Facebook. Keep up with Sarah’s writing on her blog, and check out her art portfolio on her website.

Manage Cookie Consent
To provide the best experiences, we use technologies like cookies to store and/or access device information. Consenting to these technologies will allow us to process data such as browsing behavior or unique IDs on this site. Not consenting or withdrawing consent, may adversely affect certain features and functions.
Manage options Manage services Manage vendors Read more about these purposes
View preferences
{title} {title} {title}